As I blog this, I am watching the Great British bake off and feeling shamed by this post - it's not exactly classy cooking, but it's what we had for pudding after tea tonight, and they tasted fab, and took 5 minutes to make, so I thought they warranted a post!
I made some jam tarts yesterday to use up leftover pastry, and tonight I put marshmallow on the top, and grilled them until the marshmallows melted and browned on top. 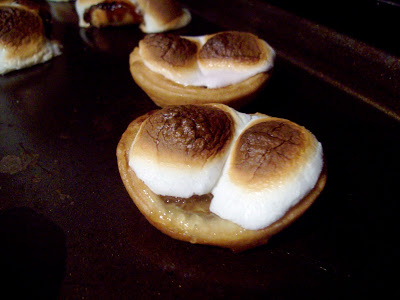 That's all!
I thoroughly recommend you do it too. In fact, you don't even have to bother making the jam tarts - buy a packet of ready made ones and it will literally be pud on a plate in 5 mins, including opening both packets ;o)
I used one marshmallow, cut in half, to top each one, and the jam varieties I put in tarts were gooseberry and ginger, as they were the ones that were open and needing used up.
No finesse, but lots of marshmallowy goodness, without having to get campfire smoke in your eyes, and eat bits of marshmallowy twig bark (although that is, of course, part of the campfire charm!) 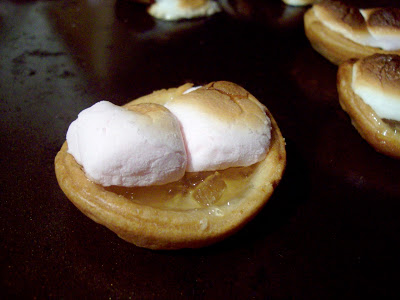