Sadly I find myself having to write this post about a baking failure. And not a one off - a repeated failure! October was my first month participating in the Daring Bakers challenge. This month's challenge was chosen by Ami S, and it was a hard one... the challenge recipe was macarons from Claudia Fleming’s The Last Course: The Desserts of Gramercy Tavern - delicate and refined French Macaroons. 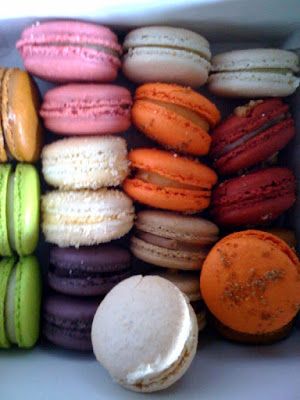 Gorgeous macaroons photographed by Flickr user mezuni and used under Creative Commons license
Enjoy the beauty and then read on forewarned - mine did not look like that!

It seems that macaro(o)ns are many things to may people the world over - of course there are the stunning pastille coloured French ones - the subject of this challenge - made famous by the sophisticated likes of Laudree and Pierre Herme.
Then there are coconut macaroons, Australian in origin, and enjoyed the world over as a mouthfulls of chewy gooey coconutty goodness.
But here in Scotland macaroon is something completely different... it's a ridiculously sweet confection made with mashed potato and vast quantities of icing sugar, often dipped in chocolate and rolled in toasted coconut (for that 1970s exotic touch ;o).

It's even made and sold commercially by Lees along with other traditional sweeties such as tablet, fudge and coconut ice.
But I digress... I guess what I'm saying is that the chances of someone who thinks macaroons are made mainly of cold potatoes being able to conjure up some beautiful elegant pastel coloured french beauties should probably be considered slim to none... and in that case I have managed to live up to all expectations!

Batch No. 1 - no photographic evidence but they were flat and tragically sad looking. No little feet. No gently rounded tops. They were chai flavoured and still tasted fab sandwiched together with jam and happily received as a birthday present for a friend. In retrospect I should have taken a picture but at that point I was still confident I could crack it!

Batch No. 2 - I wondered if it was the ground almonds rather than almond flour that was letting me down - so I investigated what other nut flours were out there I could substitute. After scouring the nearby healthfood shops I could find only chestnut flour. But, I thought to myself, chocolate and chestnuts go well together...so it could work. As I was tipping in the chestnut flour I thought it smelled a bit odd - kind of savoury, but I read the pack again. Ingredients - organic chestnuts - suitable for cakes baking and pastries - and I ploughed on. As they were cooking away in the oven and I was tidying up, I picked up the bag of flour and turned it over. The other side was written in French, and my French is not amazing, but I'm pretty sure it said 'flour made from chestnuts dried over a wood fire' - hence the weird savoury flavour. Smoked chestnut flour.
As well as tasting disgusting, Batch No. 2 was also a flat failure. In fact the best picture I have of them is of the frenzy they caused when I fed them to the birds!!!! 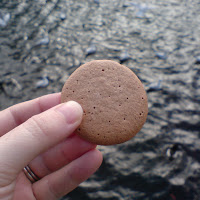 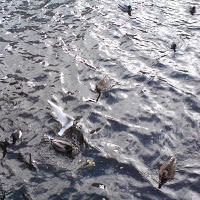 Batch No. 3 - Things are looking up.... a little! I decided I hadn't been vicious enough in my egg beating making my mixture too runny. So this time I gave them an extra hard beating and went for 100% unadulterated plain almond mix. They did not have feet or shiny tops. But they did however taste very nice and get rave reviews from everyone that ate them. 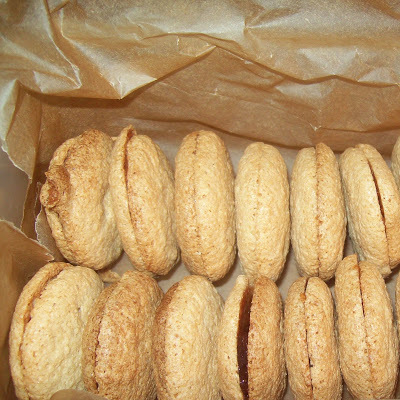 I had great plans for further experiments - with some properly exciting flavour combos up my sleeve too. But then rather unfortunately I got swine flu. Which means that instead of baking macaroons I have mainly been lying in my bed thinking the world was coming to an end. I am soooo much better now but still with a horrible cough, and baking and coughing in my book do not go well together - here have some homemade cakes and a nasty virus is not a good gift for friends! So I will have to settle for Batch No. 3 as the best batch so far, but watch this space - I have been bitten by the macaroon bug and I will not be beaten...