The Daring Bakers' February 2012 host was - Lis! Lisa stepped in last minute and challenged us to create a quick bread we could call our own. She supplied us with a base recipe and shared some recipes she loves from various websites and encouraged us to build upon them and create new flavour profiles.

Way back at the beginning of February I made some strawberry yoghurt bread - it was yummy and duly photographed to be included in this post, however said photos were on the laptop that met with the unfortunate hot chocolatey end, and whilst the data is thankfully backed up and not lost forever, it's not quite made its way back onto the replacement.

So suddenly yesterday I realised that today was DB blogging day, and despite having baked, I had pretty much nothing to blog, since I can't even remember what recipe I used for the strawberry yogurt bread. Not to worry - super fast cider bread to the rescue! 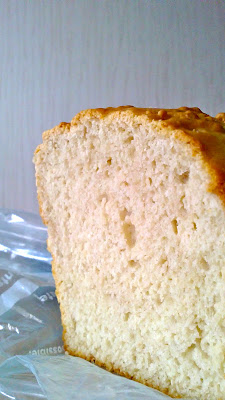 I've made beer bread before on a couple of occasions and been pleased with the results, and last night decided to take the experimentation a step further and make cider bread. It gets a massive thumbs up from me :o). Unbelievably quick, very very easy, just 3 ingredients, and minimal effort. 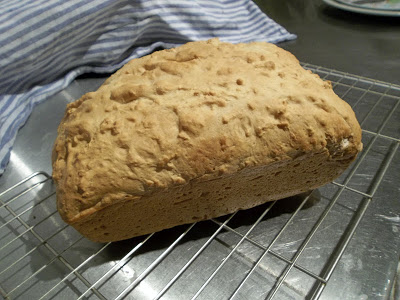 It's a fairly sweet bread, but fantastic toasted, and great with something slightly salty - it made delicious bacon sandwiches - of a bowl of hearty soup.


Preheat the oven to 180C and grease a loaf tin.
Sieve the flour into a mixing bowl then stir in the sugar.
Pour in the cider (it will froth like crazy and make you feel like you're doing chemistry, not cooking!) and mix well.
Tip it into the prepared tin and bake at 180C for 30-35 mins until risen and golden brown. It should pop easily out of the tin, allowing you to tap on the base to see if it is cooked through - if it is it will sound hollow rather than dense.
Cool on a baking rack.
The easiest bread in the world! It also works just as well with lager and beer, although they obviously impart a beery rather than cider-y taste to it. 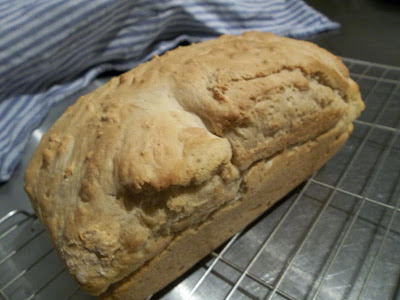 It cuts really well, has a lovely soft texture, isn't too dense and has a fairly fantastic effort to reward ratio.

Next time you need a quick baking fix, make this! It'll make you smile. I made this one in 38 minutes total from opening the cupboard to get the ingredients to tipping it out onto the cooling rack, so as far as baking goes, and especially bread baking, it's pretty much instant gratification!