I'm back on my culinary tour of some of the lesser visited countries in the world - more specifically I'm trying to cook something from every country that I've not had a blog visitor from (assessed via the ever insightful Google Analytics).

So far I've ticked off  Gibraltar, Georgia, the Isle of Man and Monaco. Now it's Aruba.

I made Pan Bati which are a traditional side dish of cornmeal pancakes flavoured with vanilla. Apparently they are often served with fish as a main course accompaniment, but we had them cut into fingers and dipped in fruity custard for pudding - a very untraditional (but toddler friendly) approach! 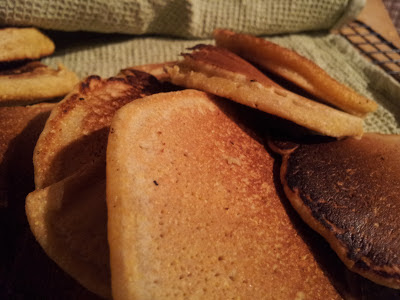 The recipe I found here was a little vague... so I'm posting my own version here which are also dairy free. As well as pinning down a quantity for the sugar, I made the executive decision to use fine polenta: the recipe specified cornflour but from the picture I reckoned it actually meant cornmeal, rather than the white powdery stuff we call cornflour in the UK.

I cooked half of the mixture using the quantities of flour and liquid specified in the recipe, but it was pretty sticky and even over a fairly low heat seemed very prone to burning long before the middles were cooked. There are three possible causes I can think of... 1) the addition of cornmeal, since I've never had this happen with regular pancakes 2) I used hazelnut milk, which I don't think I've tried to cook with in anything fried before or 3) the thermostat on the hob is wonky, so even though the dial was set to medium low, I was actually cooking on 'super heated'. I think (hope) that it's probably a combination of the first two!

Halfway through cooking the mix, I decided to add some liquid - I went with about 1/4 cup extra of water which made a huge difference. They still burned easily, but cooked super quickly and were done in the middle at the same time as the outside.

The taste of the pancakes is lovely and they are a little bit more dense than regular ones. I'm not sure I'd want to eat them with fish or other savoury dishes, but perhaps if there was only a smidge of sugar they'd be perfect. They would certainly mop up juices or gravy well!


Beat all of the ingredients together well until smooth, adding the extra water if it seems a bit too sticky.
Heat a heavy bottomed frying pan, grease it lightly, and drop in spoonfuls of the mixture.
Fry for a couple of minutes until small bubbles start to rise to the surface, then flip over and give them another minute or two on the other side.
Cool on wire rack in a tea-towel to stop them drying out. 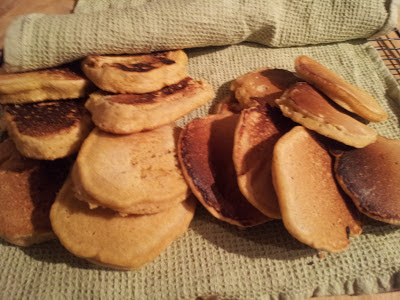 Enjoy as you will - toasted and buttered for breakfast, dipped in custard (a la Mini-M), or if you're feeling brave, as a side to an Aruban main course (whatever that may be!).

And in case you're wondering... Aruba is an island in the Caribbean 17 miles north of Venezuela and 81 miles east of Colombia.