Time for another offering under the 'countries of the world I've not had blog visitors from' heading.

This one is from Azerbaijan, although we no doubt spoiled the authenticity by serving it with spaghetti, since that is what Mini-M wanted and we were happy to play along if it meant she wanted to eat it! That's the reason for the 'ish' in the title - I wouldn't want to imply that in Azerbaijan folk traditionally eat this with spaghetti!

So here we have... Ordubad usulu Mash Shorbasi which is translated as Dried Bean Stew (although it features lamb too, which I'd have personally put in the title if I'd been in charge of the naming...)

I used this recipe here, but about 300g lamb rather than 450g, and used lemon juice rather than the dried plums as the alternative suggestion.

The result is a hearty, tasty, and relatively cheap stew, since the meat content isn't too high. It's not exactly a glamorous dish, however... even less so when photographed a) by me on my phone and b) served poured over spaghetti (although it does eke it out to serve another meal!). 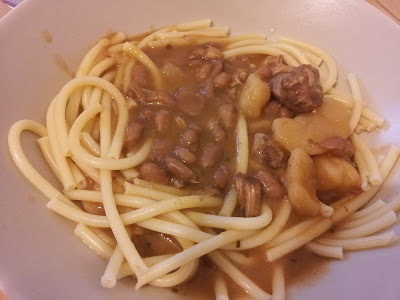 Ah well - will just have to cook something photogenic soon to make up for it!