It's pancake day, which is generally a happy occasion, and doubly so because I have a laptop again. Woop!

To celebrate, I made a Hungarian style layered pancake cake. It its made from 4 pancake layers, which are made with whisked egg whites to make them a bit lighter and puffier, sandwiched with ground almond filling, and topped with soured cream (or in this case, plain soya yoghurt) and then baked in the oven.

No recipe, since I'm too busy amusing myself with the smart scrolling options on the track pad, and generally finding my way around.

But a picture (of course) and a little Mini-M anecdote. She's getting pretty (scarily!) good with words at the moment. There's not much she doesn't understand, or have a word for, and her confidence in stringing them together is skyrocketing. 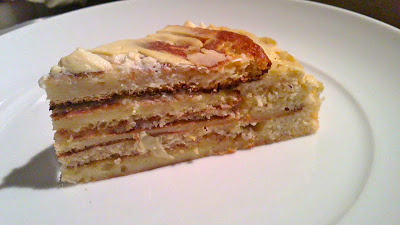 After tea tonight she was given a bit of said pancake cake (which she didn't eat - no surprises there) for pudding. She looked at it (or rather prodded it disdainfully with her spoon) and said 'Mummy make cake' to which Mr E and I looked at each other in amazement! He said "Very good!" and she gave a little not of satisfaction and said "Well done". Sadly, since she didn't put any of it in her mouth, and mainly shoved it around the plate, I'm pretty sure the congratulation was at herself for getting the words right, and not at my cake making skills, but either way, it left us fairly gobsmacked. She also was very interested in the new "lap-pot"... there's a sign of her generation - just about 19 months old and already tech savvy.