I feel I should qualify that rather ambitious sounding title with a slight caveat: if you are short of apples but have a relatively well stocked store cupboard! It's not a magic apple equivalent of the loaves and fishes. It's just a way to eke out fresh ingredients when you don't fancy facing the supermarket and are trying to stretch your fresh fruit supply out as long as possible! 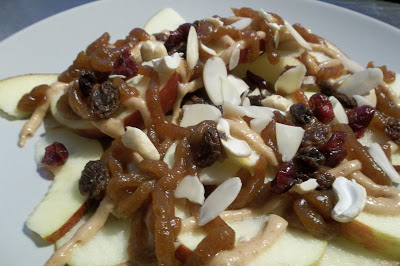 I bring you... apple nachos! This was based on a recipe I found on Food Doodles for Apple Nachos with Cinnamon Spiced Raw Vegan Salted Caramel. I tweaked the sauces a little, since Mini-M isn't a big cinnamon fan, and I didn't want as much caramel, or to have to blend it for 7-8 mins. But in essence it's the same idea - and what a genius idea it is.

Apple Nachos (Serves 2 adults and 1 toddler with a healthy appetite for apples!)
For the apple wedges
For the sprinkles
For the peanut butter sauce
For the date caramel sauce
Halve, then quarter the apple and cut out of the core. Don't peel it, and cut into thin slices.
Put in a bowl and toss in the lemon juice and water to stop it browning.
To make the peanut butter sauce, mix the peanut butter and water together until well combined - it will still be fairly thick, but dollop-able rather than spreadable.
To make the date caramel sauce, put the dates in a measuring jug and pour in enough boiling water to just cover. Add the maple syrup and vanilla extract, then with a stick blender, blitz until smooth.
To serve, spread the apple slices across a large plate, then put the peanut butter sauce into a small plastic bag. Cut off the corner and squeeze to drizzle the sauce all over the apples. Add the date caramel to the bag and do the same. Sprinkle with the sprinkles, then enjoy! 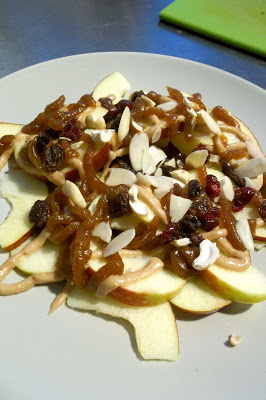 This was lovely - particularly enjoyed by Mr E and myself. Mini-M was fairly fastidious about picking off all the sprinkles and wiping off all the sauce on the edge of the plate, but happily munched on the apples. For a less fussy little one, I think it would go down a treat!

I should add that if you've read this far, you'll have worked out that it isn't really caramel in any shape or form, but actually date puree - but believe me, it really does have a caramel taste - much better than many dairy-free 'caramels' made in the traditional way. Give it a shot - you might be surprised how tasty healthiness can be! 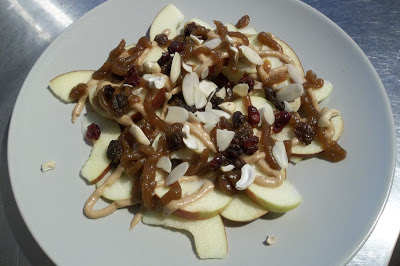