Tonight, I spent the evening with the Edinburgh Cake Ladies at Mimi's Bakehouse, sharing and comparing some spectacular tarts. Just that I since I'm currently failing on the dairy re-introduction, I couldn't eat any of them. But mmmmmm they looked awesome. Chocolate, caramel, rhubarb, frangipane, pecan, custard, lemon, bergamot, raspberry, apple, onion - the list goes on. The table was literally groaning with tarty specimens - well done cake ladies! All set in the ever lovely and now bigger and better than ever Mimi's Bakehouse. (Next time you're in Leith, pop in for some seriously amazing cakes and yummy food, served with a touch of both elegance and mischief.) 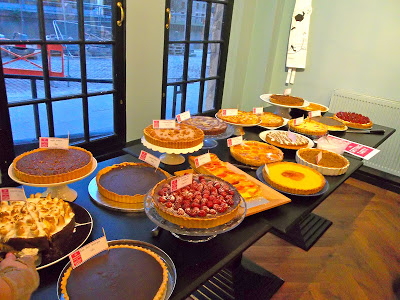 And my tart... I made a Rum and Coconut Treacle Tart. I'm classing it as neither a success or failure - the jury remains out. Dairy free margarine doesn't make good pastry, but putting rum in anything makes it taste good, so the end result was kind of neutral. I'll post it soon, because for once I got some nice baking photos! Yey - natural daylight.

But back to the masochism... pretty much at the other end of the scale from an evening of cake feasting, on Saturday I ran the Mighty Deerstalker "5k" adventure race. "5k" turned out to be more like 8k, with a host of obstacles including scree climbs, bogs, river crossings, cargo nets and two 6ft high walls! But my partner in crime and I both completed it relatively unscathed - well done Mrs H!!!

Starting from the grounds of Traquair House in the lovely Scottish Borders, participants are encouraged to get into the 'country' theme by dressing in tweed - hence the name, however we reckoned running in fancy dress was an additional challenge we didn't need. But on the other hand we were worried that by looking too serious about it, we might be mistaken for people that could actually run. Let's get this clear - we can't!
So I set to work customising some t-shirts... Mummy School Goes Deerstalking, complete with Bambi in the cross-hairs on the front. I used iron on flock transfer for the front picture, and squeeze fabric paint pens for the writing on the back, tracing over printed letters which I placed between the layers. They survived the race along with us, but even the best efforts of our washing machine couldn't get out the mud!