Well due to general hectic-ness, I've not posted anything for ages. But I'm back :o) The other week as I was tidying out some kitchen cupboards, I came across a bag of dried pears, a BIG bag of crystallised ginger, and a bag of prunes all approaching their use by within the next few months, and definitely ready to expire before I'd had a chance to use them up in normal baking practices!
So after a bit of googling, I came across this recipe for Hungarian Lekvar, which is a dried fruit butter, made with dried apricots or prunes.
Since I'm a pathological recipe corrupter, I did a bit of modification, and went for prune and dark chocolate butter, to make use of a small bar of Lindt 95% chocolate which was too bitter for me and had even escaped several emergency chocolate cupboard raiding attempts. Inspired by the successful result, I decided to get more experimental and went for spiced pear and ginger, with a vanilla pod, cloves and star anise to add a spicy sweetness.
So far the concoctions have proved to be a versatile pair, although the prune and chocolate one is possibly a little confused about its identity and is treading a fine line between sweet and savoury. Or perhaps it's just me and my husband that are confused - he's definitely of the sweet camp, but I'm convinced it's a relish/chutney savoury wannabe. 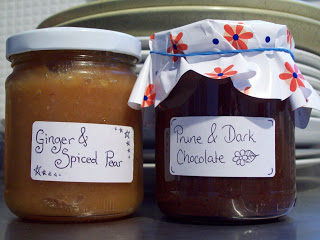 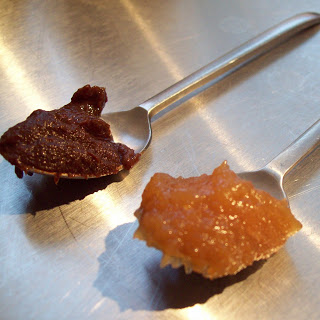 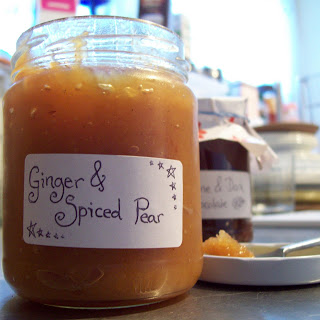 Anyway, here's a run down of the situations in which they've been consumed so far...