When I got in from work today, I was greeted at the door by a very excited Mini-M, clutching a half shelled boiled egg, telling me she was making dinner, and indeed she was. Under the patient supervision of Mr E, she was busy making 'Party Eggs' inspired by this episode of "I Can Cook" (just incase anyone is feeling in the need of a) a kids TV fix or b) some party inspiration themselves...). 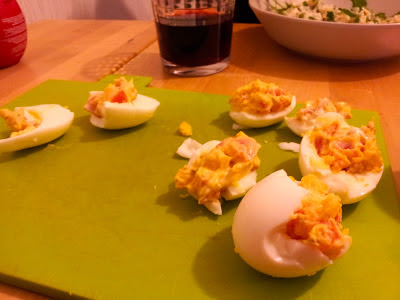 Since she was doing a grand job, and Mr E had everything under control, I took some photos. "Party Eggs" seem to be hard boiled eggs with the yolks mashed with chopped tomato and a little mayonnaise.

The end result was eaten by all, including Mini-M which is always a good thing, and the egg bashing, rolling, peeling, washing, chopping, squeezing and mashing had her thoroughly engrossed.

There was much egg washing fun to get all the little bits of shell off, water swirling and exclamations of "Look it's going round and round Mummy!" Simple pleasures. Then there was chopping, which with a 'Hello Kitty' toddler table knife that is about as sharp as the handle of a spoon, was probably more enthusiastic than accurate. The 'gently squeezing the eggs to make the yolks pop out' instruction was interpreted rather vigorously too. Hence the slightly haphazard appearance of the finished product...
They tasted good, Mini-M was very proud, and tea-time was a success.