After reading the title of this post - Blueberry Honey Pies - I can't help thinking that it sounds like the name of a Carebear, or My Little Pony, however it is in fact my Daring Bakers' June challenge submission, and what we had for pudding tonight.

Rachael from pizzarossa was our lovely June 2013 Daring Bakers' host and she had us whipping up delicious pies in our kitchens! Cream pies, fruit pies, chocolate pies, even crack pies! There's nothing like pie!
That's not a typo above, there really is such a thing as crack pie, that is entirely legal (although also entirely unhealthy). It's an oatmeal cookie crust, filled with a gooey sweet fudgy chewy filling - and also really really really full of dairy things (like butter, more butter, powdered milk and whipping cream). Whilst I do like to pick up the de-dairification gauntlet, that seemed a bit beyond me. Plus there's something decadent about eating lots of butter, which just doesn't work with soya margarine! 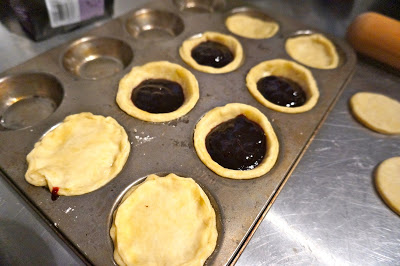 The other challenge recipes suggested to us were a crostata (an Italian pie filled with fruit preserve), chocolate caramel pie (again, difficult to de-dairy) and a traditional double crust apple pie. 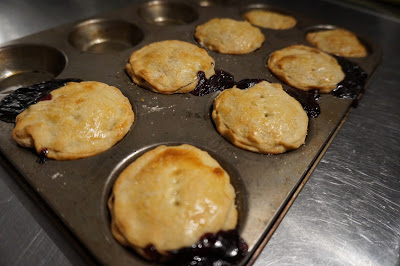 I ended up making what is probably closer to the progeny of a union between said crostata and double crust apple pie: little double crust pies filled with blueberry preserves and honey. 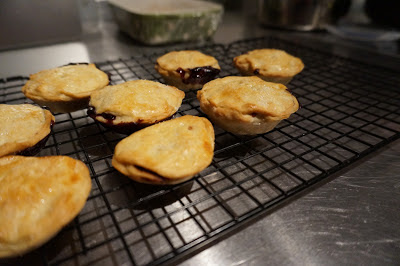 I made an olive oil pastry, which I always find turns out slightly tougher than a butter pastry, but very quick and easy to make. I used this recipe from The First Mess, which other than substituting the spelt flours for regular white plain flour, I followed fairly closely. It uses extra virgin olive oil, but the taste isn't overpowering, and I would hazard a guess that the 'extra virgin' bit isn't critical - most oils should work, although some might impart more or less flavour and sophistication than others... 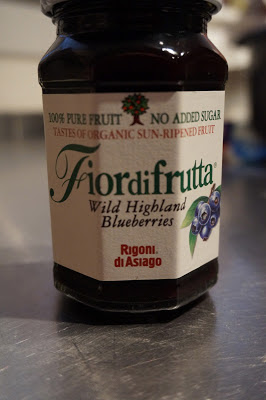 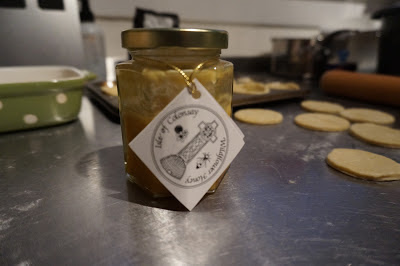 For the filling, I mixed together some lovely blueberry preserve we were given as a gift (about 1/3 of a jar) and a heaped teaspoon of honey. Not any honey, Colonsay Wildflower Honey which we brought back from our summer travels last year and have been carefully rationing! It's gorgeous stuff - and made by very lovely happy bees - Mr E survived 3 days of a hands-on beekeeping course with the Colonsay bees and emerged un-stung which is a testament to their good nature.

The blueberry and honey flavour combination was delicious - and the pastry recipe is a keeper - one even survived the journey to work unscathed, to be rather unglamorously photographed at coffee time - cling film, dusty keyboard and all! 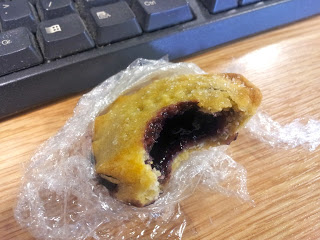