So, I'm getting off to a bad start for this month's Daring Bakers challenge - I've just realised this was supposed to be posted yesterday - oops! Better late than never I guess.
Instead of something baked, this month the challenge was to make cannoli. Without going into too much detail, since it's 23:23 by my computer clock and that means imminently time for bed, they are a type of Sicilian fried desert pastry, filled with a creamy filling - traditionally made with ricotta cheese and dried fruits and nuts. They are fried on cannoli tubes to keep them hollow, and the filling can then be piped in when they are cool.
This challenge was a joint attempt - the lovely Lisa (my little sis) came round and helped me create kitchen carnage. Since we didn't have any cannoli forms, or a handy wooden broom handle to butcher as many people seem to have used, we opted for dried pasta canneloni shells to form our cannoli round. I'd say this was a success, but not foolproof - unfortunately the shape of some of the canneloni tubes changed during the deep frying, making the cannoli an absolute nightmare to remove. But anyway, enough of the chat - here are the only two half acceptable pictures I managed to take! 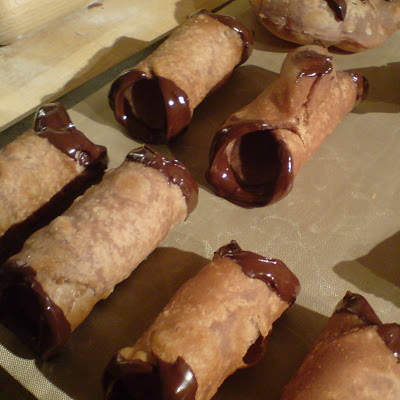 The fried shells dipped in chocolate and almost ready for filling... we filled them with mascarpone cheese, sweetened with icing sugar and chopped fresh mango. 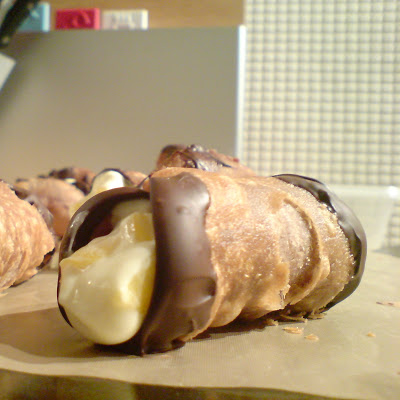 And there you have it! Cannoli. How did they taste - well they were nice, but on balance we both agreed that they maybe weren't quite worth the effort, but definitely a fun experiment!