We've just been to France - Brittany so be specific, for our summer holiday, and as someone who writes a blog that is at least 80% about food (and the other 20% is generally nonsense), I can't help feeling I should have some beautiful photos of the lovely French food we enjoyed.

So instead I am posting photographic walk of shame - no beautiful French cuisine - but a true culinary representation of our holiday nonetheless!
So to kick off with - a service station about an hour outside Bristol at about 08:30am on a Sunday morning, after having left home at 3am and making good progress down the road. It was probably too early in the day to be eating popcorn as a snack... but we did, and it had the added function of being the ideal medium for some table-top blow-football entertainment!!! 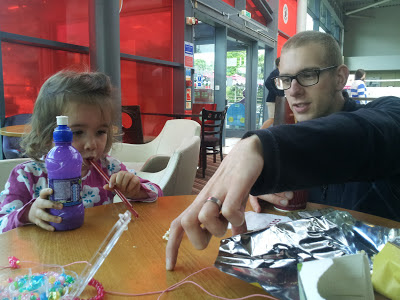 In Bristol, and we discovered we were staying very close toe PepeNero - an organic pizzeria that specialised in vegan pizzas and pastas! (Not that we're vegan, but vegan = dairy free = much less complicated dining). 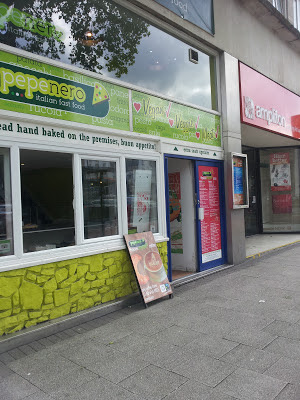 So of course it would have been rude not to sample the vegan pizza delights (with vegan ham substituted for real ham, at the slight confusion of the waitress!) It went down well with Mini-M and Mr E, as did my vegan tofu cannelloni. 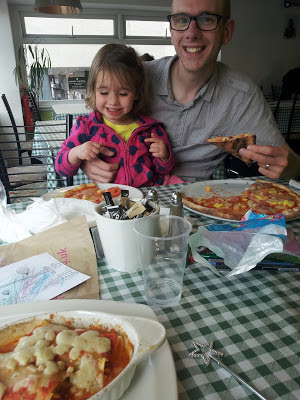 And in fact the also did vegan hazelnut chocolate cake. Specifically, the label titled it as "Double Vegan Chocolate Cake" but I'm guessing they were hoping to emphasises the double chocolatey-ness, rather than double vegan-ness! We bought a piece to take home and enjoy in our hotel room after Mini-M had gone to sleep... just that she wouldn't unless we did too - so we had it for breakfast the next day. Holiday food standards slipping... (although I would happily start everyday with chocolate hazelnut cake). 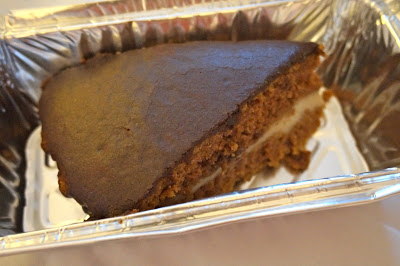 The civil engineer in me couldn't help but be tickled by the name of this cafe along the quayside in Bristol and judging by the huge queue, Brunel's Buttery is good - although we didn't stop since Mini-M was asleep in the buggy. 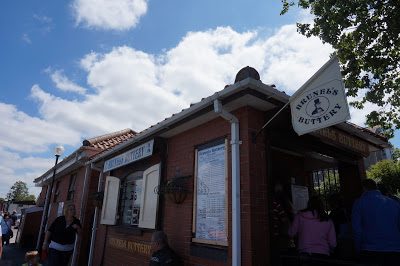 On the boat eventually, and the in-cabin tea and coffee sachets provided a good hour of pre-bedtime entertainment for Mini-M. 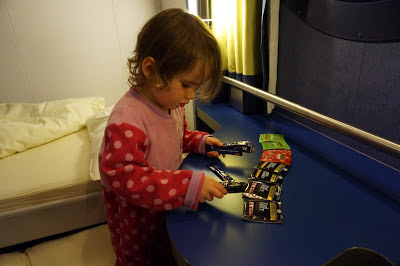 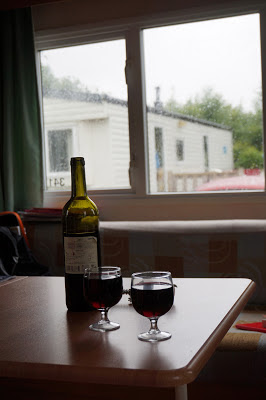 Porride - yep we are so Scottish we travel with oatmeal..... or it's a useful portable fallback if all else fails for Mini-M. We enjoyed it for breakfast with honey and bananas. 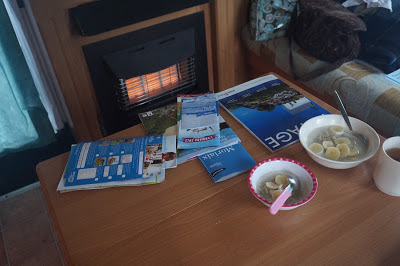 A BBQ that wouldn't light properly since it was rather gusty, and never quite got hot enough to properly cook on - but we tried... it wouldn't be a summer holiday without at least one bad BBQ. 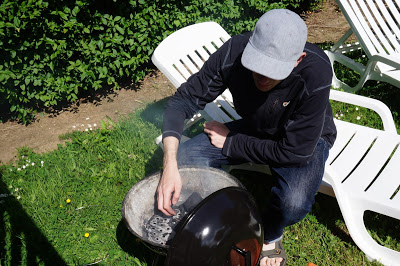 Apricots - huge ones that were peach sized and lovely. 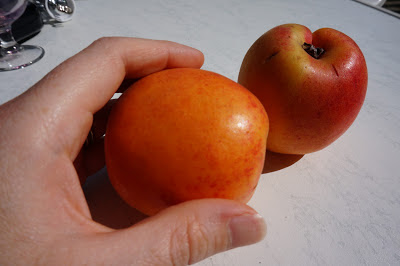 Waiting excitedly for crepes which we made in our caravan since they had to be dairy free. The plate on the far right is giraffe's tea - Mini-M collected some leaves and sticks for her teddy. We weren't allowed to put the plate away for the duration of the holiday, as apparently giraffe hadn't finished it. 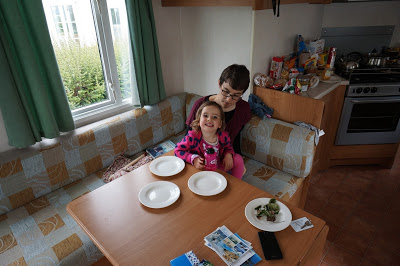 Crepes - made with soya milk, and eaten with banana and honey, with second helpings spread with melon jam. 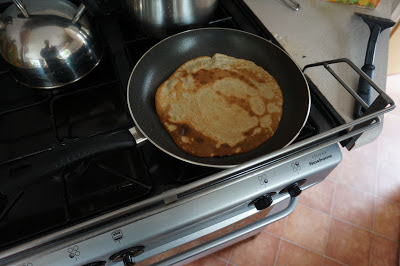 Trying some artichoke at a fruit and veg event- it got the thumbs down from Mini-M and Mr E. I didn't taste, as twice chewed artichoke was not that appealing! 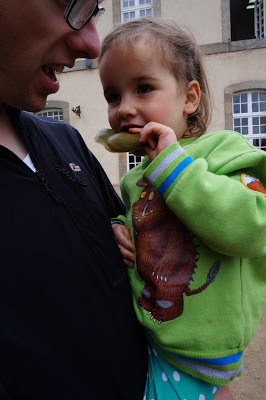 At the same fruit and veg event - some cross-over veg / flower arranging. Leek and lily bouquets - not sure it'll catch on... 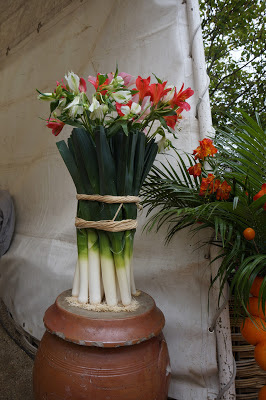 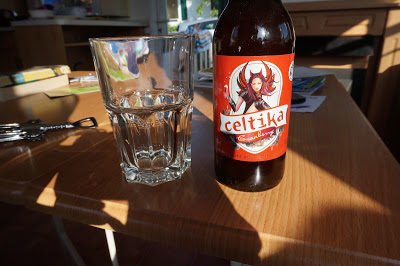 And of course on the way back on the boat, the in-cabin coffee shop was in full swing again. 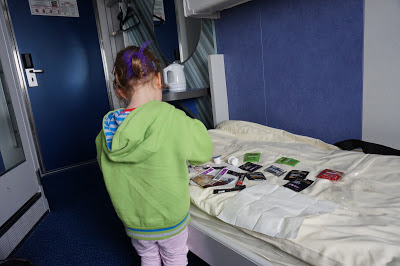 Meal out no. 2... in the Brewer's Fayre. In our defence, it was attempting another 35min drive from the ring road into Gloucester, with a hungry toddler at rush our, or a 2 min walk across the car park to somewhere that had a kids playpark and we could both have a drink after a long day, since neither of us had to drive. Are you surprised the Brewer's Fayre won? But what is really worrying is that we now have a loyalty card??!!!? 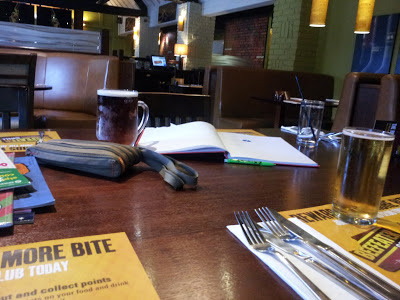 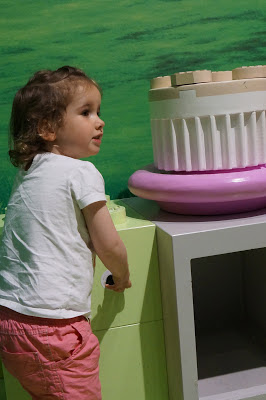