A few weeks ago it was Mini-M's 3rd birthday. How time flies!

An birthdays mean birthday parties and birthday cake. Last year Mini-M requested "Kitty Pirate Cake" and I did my best. This year she was less specific - just "Kitty Cake".

Since we had a vaguely beach-y party theme, I decided to stay colourful and go for a rainbow Kitty Cake.

But the icing is all secondary - cake has to taste good! In this case, it was a carrot cake made from the BBC Good Food "Yummy Scrummy Carrot Cake" recipe. It deserves it's 699 ratings and 5 stars. I've made it several times now and it is fool proof - and even better, dairy free :-) The only change I made was to use light olive oil instead of the sunflower oil. 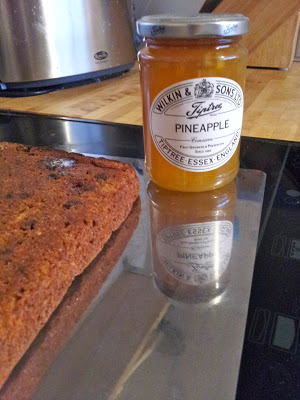 I made the quantity in the recipe and baked it in a roasting tray, to make a fairly thin layer (I was making cake for 35!), and did two layers like this.

I filled the middle with pineapple jam, to keep up the tropical theme (although admittedly carrot cake isn't sooooooo tropical).

I'm not a massive fan of fondant icing - it's all well and good for making things look pretty, however it tastes of absolutely nothing apart from cloying sweetness. Yuk! So I decided to make the same icing that was a hit on last year's cake - 7 minute meringue frosting. I have no idea how folk make this stuff in 7 minutes - they clearly have a much more powerful whisk that I do, since each time I've tried it takes me almost 20 mins of beating to get the right consistency - but I have learned that in this case patience is a virtue and it is worth it in the end. (As an aside, I doubled the recipe then had about 1/3 of it left over - and that was for a huge cake - so the quantity in the recipe is more than ample for any normal one.)

And so to the decoration... By the time it got to 1am and I was still sticking on liquorice whiskers, I can tell you I was cursing my chosen design!

I used a Hello Kitty biscuit cutter to stamp out 18 faces in pastel rainbow colours of fondant, which I had coloured up in small amounts using gel colour. Mr E was even roped in to help with the kneading. 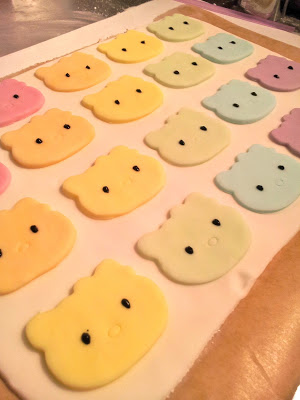 I made myself a paper mock up so that I got the spacing right, and didn't put any of the colours in the wrong places. 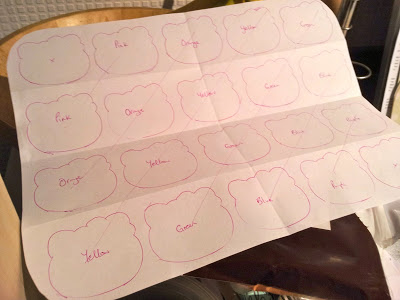 I used a straw to mark out where the noses should go, then black royal icing to put in the eyes, and white to fill in the oval of each nose. 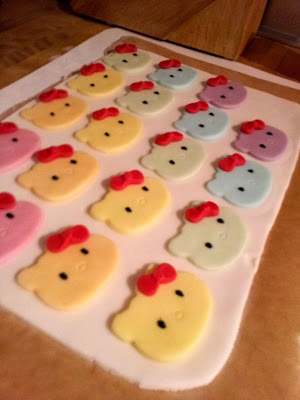 I used a little more red fondant to make the hair bows, and stuck them on with a tiny dab of water. 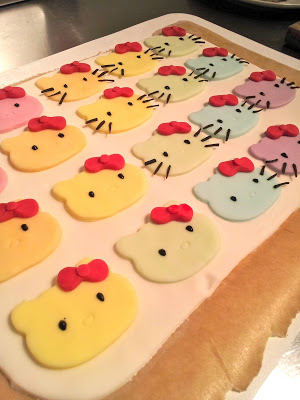 Mr E painstakingly dissected some liquorice allsorts to cut the slivers of liquorice for the whiskers - the things we end up doing for our kids... 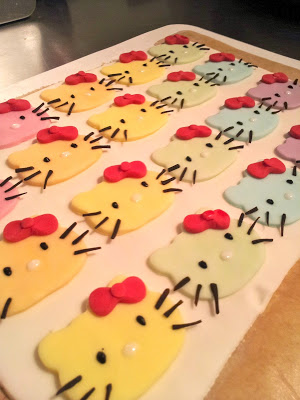 If I never have to stick on a liquorice whisker again in my life I won't be disappointed... 108 is more than enough for me. 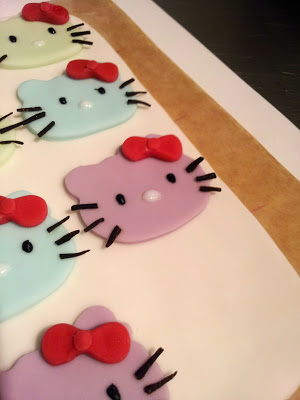 Because I was using meringue frosting, I put all of the Kitty heads on a thin sheet of white fondant, as I couldn't ice the cake until the morning of the party, but didn't want to have to do any fiddly stuff then. Unfortunately I cracked one side whilst putting it on the top, right in the middle at the front :-( but it wasn't too obvious once some cocktail umbrellas and paper pineapples were added! 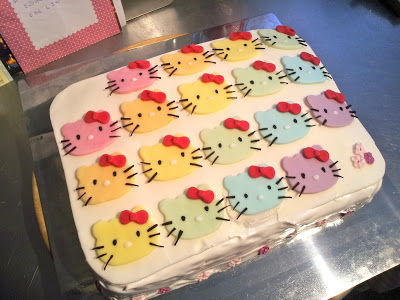 Mini-M was very excited by it, although she did ask where the sprinkles were... 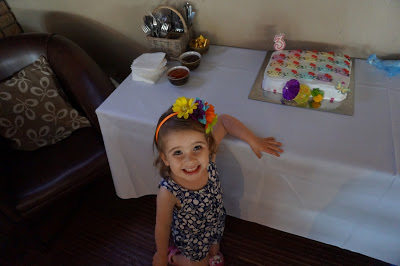 She waited patiently all through the party and only asked about 17 times if it was cake time yet. 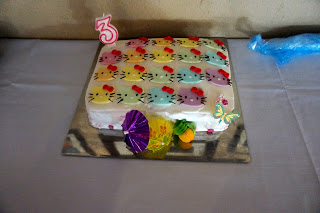 And then eventually, it was :-) 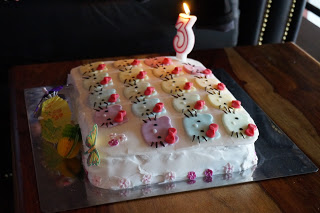 Ready to blow out the candle 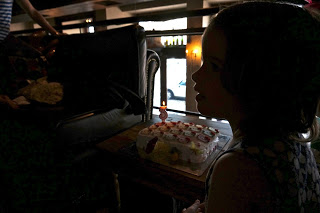 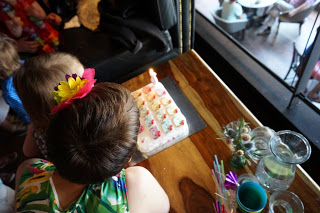 The cake was lovely and moist - and sticky! The meringue frosting and pineapple jam were possibly more suited to plates and spoons than napkins. That's certainly how we enjoyed the leftovers the next day, however at the party everyone seemed happy enough to lick fingers and lips (and in Mini-M's case the paper plate too). 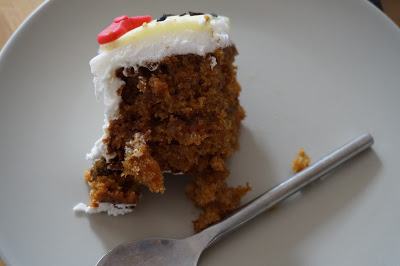 I wonder how many more years of Hello Kitty cake design I have to invent before Mini-M moves onto another favourite theme?!?! Suggestions for next year welcomed... 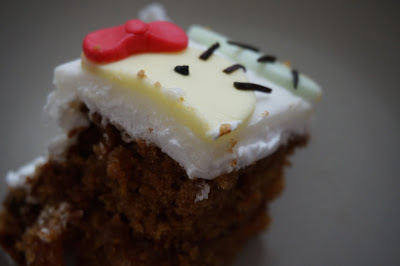