Within a month, we have all three of our family birthdays, so from mid-July to mid-August I'm generally slightly preoccupied with birthday cakes!

This year, Mr E turned 30 and we had a party for family and friends halfway up Arthur's Seat in Edinburgh, complete with kilts, party frocks, bubbles, chilli and nachos, umbrellas, rain, wellies - and of course cake.
I wanted to make something that would be easy to prepare in advance. Mini-M wanted to decorate the cake. I wanted it not to look too much like a crazy toddler special, since it was going to be dessert for everyone. My original plan was to let her decorate the cake with a variety of sweets, and went on an inspiration / ingredient gathering mission to ASDA to see what dairy-free decorative delights I could come up with. They had After Eights on special offer - and the rest, as they say, is history! 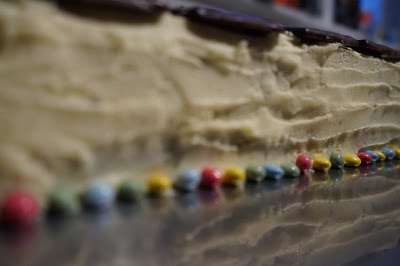 (I should point out now that After Eights aren't actually dairy free - they do have butterfat in them, but that doesn't seem to be a problem for me - but obviously might be for some people. Butterfat contains minimal amounts of milk proteins - but there are still likely to be traces).

Whilst pondering the box of After Eights (mainly along the lines of 'maybe I could just eat one...') I realised that 30 would fit on the top of the cake tin I was planning to use, so I decided to ice them as little cartoon faces, using writing icing. The ultimate prepare-ahead cake decorating solution. 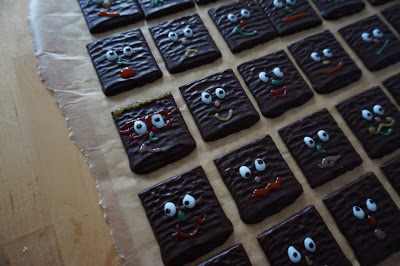 For the cake itself, since I was making enough for 30, I made a 9-egg sponge, using dairy free sunflower spread instead of butter. I weighed the eggs, then used equal quantities of sugar, SR flour and margarine. I spooned half of the mixture into the cake tin in dollops, then added 1oz of cocoa powder, 1 tsp peppermint extract and a couple of tablespoons of milk into the remaining batter, mixed well, and dolloped that into the tin too, giving it a quick swirl around before baking (in a rectangular roasting tin) for around 40 mins at 180C (160C fan). It turned out a lovely moist chocolate mint marble cake. 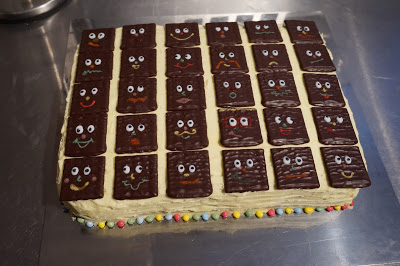 I made 'butter' icing using dairy free sunflower margarine again - if you beat in enough icing sugar, it doesn't taste too margarine-y - still sweet and lovely - especially when you're about to cover it with mints :-) 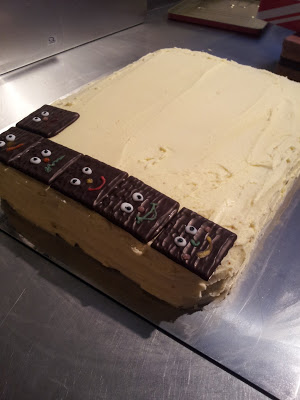 I think this next one is probably my favourite of the cake photos - I didn't realise until after I'd taken it that the face on the right has a shocked expression - maybe that's at the sight of Mr E represented in rectangular chocolate for on the left...

I thought that my After Eight iced Mr E was fairly lifelike - but Mini-M didn't agree, and failed to recognise him out of the other 29, despite being the only on with a) glasses or b) hair! 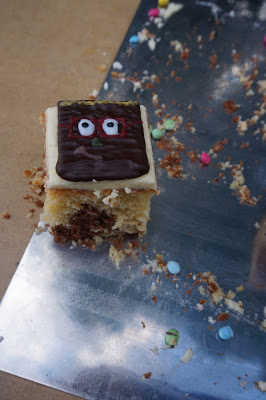 I'm submitting this to the September We Should Cocoa blog challenge - the theme is Showstopper Chocolate Cakes, and since this one is at least 50% chocolate cake, with chocolate on the top, I'm figuring it counts! 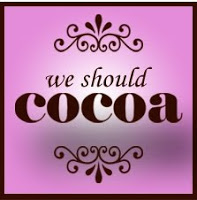