Last night I made banana muffins. With hidden spinach in them. Just that spinach is very, very green, so it was definitely not visually hidden. It was, however, very convincingly hidden in terms of taste. I kid you not, these tasted just like banana muffins. 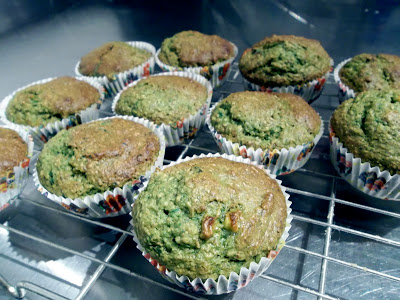 As far as muffins go, I'm giving them a ten on the toddler suitability scale. They do have a wee bit of sugar in them, but they're full of other nutritious stuff... wholemeal flour, spinach, banana, olive oil and plain yogurt. And if you fancy being a bit hippy dippy about it, like I did, you could use some form of non-refined sugar to make that bit a little less nasty!

I used a recipe found here at Anja's Food 4 Thought. I made a couple of tweaks - reduced the sugar slightly and changed the type, missed out the nuts and lemon, added some vanilla, used 'grown up' rather than baby spinach, and switched the yogurt type - so here's my version too. 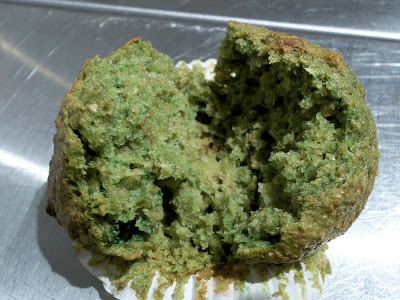 
Preheat the oven to 180C and line your bun tin with paper cases.
Sieve the flour, baking powder, bicarbonate of soda and salt into a mixing bowl.
In another bowl, whisk together the egg and sugar vigorously, then add the oil, vanilla extract and yogurt.
Mash the banana and stir that into the egg mixture too.
Blitz the spinach leaves to a puree with a hand blender, then add them to the egg mix.
Stir the wet ingredients into the flour, and mix well.
Spoon into the prepared cake cases (I got to use my new gadget - a mini ice-cream scoop for portioning out cake and biscuit mix).
Bake for about 15-20 minutes, until firm to the touch, lightly browned on top, and a skewer inserted comes out clean.
Cool on a wire rack, then feed to your unsuspecting children, and feel smug that they think they are eating cake, but you know they are eating spinach!

I tried to get a photo of Mini-M eating hers, but to be honest it disappeared pretty quickly. She even meticulously hoovered up all of the crumbs afterwards, which is very unlike her - she's normally a rather messy eater, so I'm taking that as a rave review, and a mark of how tasty they were - not a morsel was wasted!