The November Breakfast Club challenge was hosted by Susan at A Little Bit of Heaven on a Plate. I have just discovered whilst writing this post, that through my own stupidity, I completely missed the posting deadline, over a week ago. Oops. Doubly frustrating since I actually made them in very good time. Since I made them in time, I'm posting this anyway - better late than never, as they say...
The theme was 'Stars and Stripes' meaning anything with an American twist was fair game.
I decided to go down the muffin route, and went for an double American combination - Cheerios and pumpkin.
I found a recipe for Cheerios Muffins at Mr Breakfast, and decided to substitute the applesauce for pumpkin puree, and the milk for almond milk to make them dairy free.

Unfortunately it was only after I poured the batter into the tins, thinking that it didn't look quite right, that I read back and noticed instruction step one, which I had overlooked the first time...
"Crush the Cheerios into very small pieces". Oops again! I put them in whole, which meant that they didn't bulk out the mixture like they should have, and instead just went kind of oddly chewy! 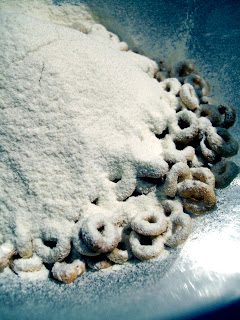 The muffins were still nice, just a little denser and flatter than the should have been. The pumpkin flavour came through well, and made them even feel a little healthier than eating regular muffins - cake with hidden vegetables in it is always a win! 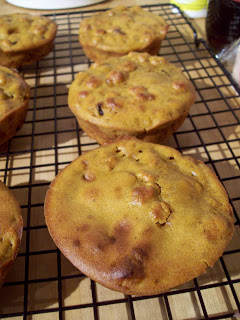 Next month, whatever the challenge is, I'll be making extra sure I read the recipe instructions thoroughly before I get stuck in though!