This month's Random Recipes challenge is a change from the regular. No rifling through cookbooks is required. No counting pages, no random number generators, in fact no cooking at all!

Instead, Dom at Belleau Kitchen, the mastermind between then Random Recipes challenges has asked us to give the world a sneak peak into our culinary lives by photographing and posting some in-situ shots of our cook book libraries.

So here's mine! But be warned - I got a little bit snap happy!

Let's start with the highest concentration of cook books - the hall book case. I get 2 shelves, Mini-M gets one. Although recently she's started asking to read "Mummy books" too, and is particularly a fan of River Cottage Veg Everyday, where she likes ordering me to turn the pages and pointing out all the veg that she knows. It's a shame her willingness to eat them wasn't as extensive as her vocabulary!

The bookcase sits in our hallway, with Luigi for company.
There are a few cookbooks stashed in the living room too - here's a close up...
These seem mainly to be here by virtue of the fact that most of these have been given to me as presents... which have been opened in the living room and never left! They share a shelf with such living room essentials as a series of zoo animal masks, classics like "My First Mega Sticker Book" and a newspaper from the day Mini-M was born. Did I mention we don't really do filing... or indeed organisation, or tidying!
These ones are some books I'm in the process of reviewing for the Daring Kitchen, so are left in an obvious place in the hope that I won't be able to overlook them. I wouldn't put it past me though!
Now the one place you would probably expect cook books is in the kitchen, but weirdly here they are few and far between. Pans - check; Lots of cereal - check; Mini-M's mini kitchen - check. Cookbooks... not so many.
No cook books in this shot either! And I'm blaming some of the surrounding cooker chaos on Mini-M who seems to derive never ending enjoyment unpacking the shelves of baking tins, flasks, tinfoil and greaseproof paper.
They might not be in the kitchen, but they're close by. Just outside the door, which currently features a giant cupcake, a colours poster, and some nursery artwork.

This curtain is as old as I am - I remember it at home as a child, and then when we moved into our house, it re-emerged from a box of old curtains. I love it's brown flowers 1970s feel. But what lurks behind it?
Our larder cupboard - full of all manner of tins and jars, including the stash of dried apricots up on the highest shelf and well out of Mini-M's reach!
In the kitchen there's only 1 actual cook book - one of the set that's obscuring out living room artwork. But beside that is 'my' cookbook. The notebook where I jot down the recipes of my kitchen creations and de-dairification of recipes.
And I leave you with a photo of my baking cupboard where chaos reigns well and truly. If nothing else, I hope this post has made all that read it feel good about the relative organisation, order, and control they exert over their own kitchens!!!!! 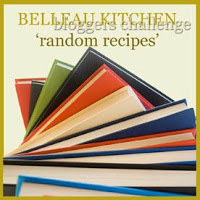