Late again. This was supposed to be posted on Saturday, and it's now Monday.
We were away for the weekend with friends to the Isle of Arran, and I thought I had written a post and scheduled it to auto-post on the 27th. Turns out what I actually did was write about 2 sentences, and save it as a draft.
So without further ado, I shall get on with it.

Our October 2012 Daring Bakers' challenge was hosted by Suz of Serenely Full. Suz challenged us to not only tackle butter and flaky puff pastry, but then take it step further and create a sinful delicious Mille Feuille dessert with it!

This challenge was, by all measures, a fairly unmitigated fail for me.

I burned my first lot of pastry, and it was good only for christening our new food-waste recycling bin. 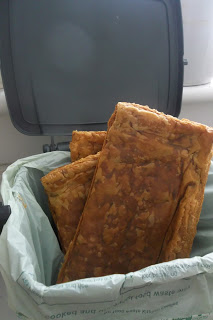 I intended to fill it with strawberry marshmallow mousse, instead of pastry cream, and the mousse was made and setting up before I cremated the pastry, so we just ate it as it was. It was made with fresh strawberries, marshmallows and coconut milk and was lovely, although unphotogenic! 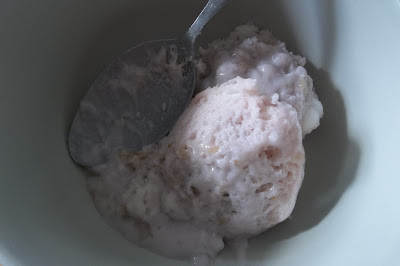 For my second attempt I used some spare ready made puff pastry, which I know is a big cheat, just so that I could try to create something vaguely Mille Feuille-ish.
I then didn't put enough pastry cream in it, and then because it was already a fail, I didn't want to go to the effort of mixing up icing to adorn something so unimpressive, so I topped it with jam!

On the plus side, I did manage to make a very tasty and effective dairy free pastry cream, or creme patisserie if you're feeling continental, using almond milk. So that's something!


Put all of the ingredients in a small pan and blitz with a hand blender until completely smooth and mixed.
Slowly bring to a medium heat, stirring constantly, until the cream thickens.
Once it coats the back of a spoon and leaves a trail in the surface, remove from the heat.
Allow to cool slightly, then transfer to a bowl or tub.
Cover with a sheet of baking parchment on the surface to prevent it from forming a skin.
Chill for at least an hour before using, preferably over night.