A very belated post tonight about the Borders Exploration Group 20th Anniversary Celebration Cake that I made back in October.
Borders Exploration Group is a fantastic hands-on youth expedition group that organises and leads expeditions both overseas and at home for young people form the Scottish Borders area. It provides hands on social, cultural, environmental and personal development for the young people involved and delivers valuable community projects around the world. And it's been going for 20 years in 2011/12.

I went on one of these expeditions when I was 16 to Mongolia - a travel destination I'm unlikely to top in the rest of my life! Jump 9 years down the line, and I was chief leader of the Poland expedition, and then stuck out several years on the committee. I've stepped back a bit at the moment, since Mini-M is providing plenty of opportunities for adventure of a different kind - sometimes just getting to the supermarket and back and feel like a bit of an expedition!

But I knew I really wanted to make everyone a special cake for the 20th Anniversary ceilidh that was held in October. I wanted something that represented all of the expedition destinations over the years, so I went for a map of the world with flags of all the visited countries around the sides, and a small model symbolising each expedition. I made the models out of modelling clay because I needed to make them in advance, and didn't want any melting or cracking disasters, and let's face it - none likes eating fondant icing on its own anyway!

When it came to icing, I discovered the slow and painful way that the outline of the world is really wiggly. Cue epic hand cramp! But I got there :o)


How did I do it - I printed the outline and lettering onto a sheet of paper, which I placed on top of the cake. I then got a sharp sterilised pin and pricked all around the outline - that in itself was fairy time consuming, but was nothing compared to the icing! And then I very carefully, with my heart in my mouth, joined the dots with black royal icing - and breathed a HUGE sigh of relief when it was done.

I made the flags from fondant and coloured them in using food colouring pens, and attached them with royal icing.

I can't pretend it was easy - it was definitely a labour of love, but I'm glad I went with the design I did, and it certainly prompted much debate and guessing during the ceilidh as to which flags were which and what the models represented.

As for the cake - it was a very moist and delicious chocolate fruitcake!

Here are all of the  models and their associated countries...
And one last pic of the cake getting cut 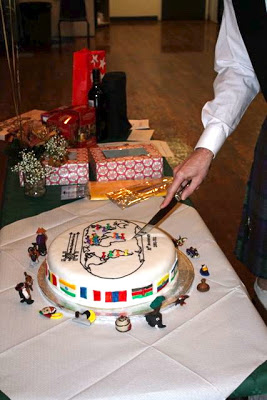