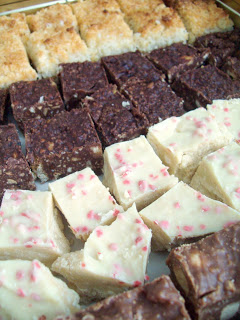 I'm have a not very secret love for recipe books: the slightly buckled shelves on our bookcase are a testament to that! As well as being a bit of a sucker for the glossy pictures and beautiful styling of the likes of Nigella, Ottolenghi and Heston, I'm equally captivated by local recipe book - generally released as fundraisers for local organisations, like the Women's Institute, School PTAs, or, as like the case in point this time, Girlguiding Roxburghshire.

Books like these are often full of hidden gems, often sketchy descriptions, and sometimes mysterious unquantified ingredients, and that all adds to the charm. I was given this one to celebrate 100 years of Guiding, and it's a largely cake and baking focused book.

Leafing through, several recipes appealed to me, and soon I had a bit of a theme going - recipes that use other ready made biscuits are the basis. Many great traybakes use digestives and rich teas as their basis, however I found a few that took the concept a little further - and of course I made a few little tweaks along the way!

So read on for my take on some seriously sweet slices featuring custard creams, jaffa cakes and digestives (both regular and caramel)... 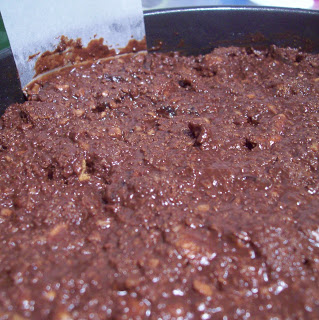 Grease a cake tin, and line the bottom with greaseproof paper.
Chop the jaffa cakes into small pieces.
Melt the butter and chocolate together - I did it in the microwave, in short bursts, stirring very frequently.
Crush the rich tea and 'Nice' biscuits together to make fine crumbs. I popped them into a strong freezer bag, wrapped in a tea towel, and set to them with a rolling pin - it's great for venting rage!
Stir the crushed biscuits and chopped jaffa cakes into the melted mixture. Pour it into the prepared tin, and leave to set in the fridge over night, before cutting into squares, and enjoying an intense chocolatey-orangey hit! 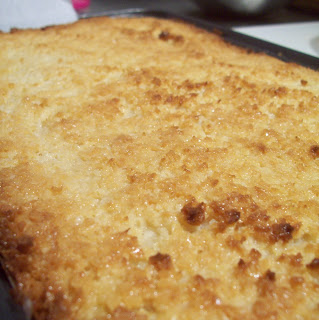 Base
Topping
Preheat the oven to 180 Degrees (170 degrees for a fan oven).
Grease and base line a swiss roll tin with silicone paper.
Crush the digestive biscuits to make crumbs.
Melt the margarine, add the crushed biscuits, demerara sugar and self raising flour and mix well.
Press it into the prepared swiss roll tin, and bake for 10 mins.
Remove from the oven, but leave the oven on.
Mix the coconut and condensed milk together and spread over the base.
Put back in the oven for another 15-20mins until golden brown on top.
Allow to cool in the tin, then cut into squares. Yum! 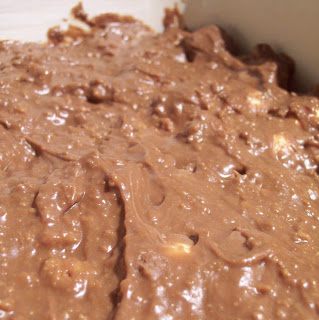 Grease and base line a swiss roll or cake tin.
Crush the caramel digestive biscuits - you might need to cut up the caramel a bit if it all clumps up - but it is worth the effort!
Melt the butter, syrup and chocolate together over a low heat in a large saucepan.
Once it is all melted, stir in the crushed biscuits and maltesers.
Pour into the prepared tin, and chill until set, before cutting into squares.
The caramel digestives take an already delicious treat to a new level! 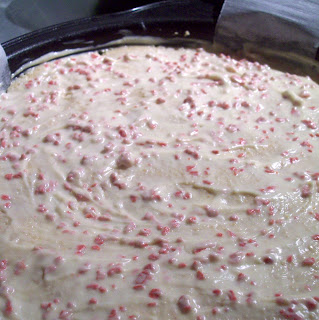 Grease and line a swiss roll or cake tin.
Crush the custard creams (including the filling - it will all mush together quite easily)
Carefully melt the white chocolate and butter together - take care not to heat too quickly, or on too high a heat, or the chocolate will seize.
Once the mixture is melted, stir in the crushed custard creams and stir well to combine.
Press the mixture into the prepared tin.
Melt the strawberry chocolate, and spread in a thin layer over the top of the mixture.
Chill until set, and cut into squares. Mmmmmm.

Once they were all set and sliced, I made them into a selection box the lovely Miss L, baby sitter and sister extraordinaire, to take on her travels to Alborg and beyond. We had a bet going that it wouldn't last to the ferry terminal in Newcastle, but apparently with some epic willpower, and some strategic stashing in the boot, it made it all the way! 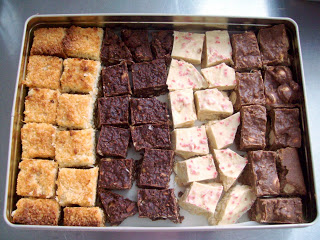