It is an unfortunate fact of life that Mini-M doesn't really like bibs - in fact she's getting quite nimble fingered at whipping them off. This bib removing skill is coupled with a lot of enthusiasm for feeding herself, which unfortunately isn't matched just yet with accuracy. So meal times in our house currently have the potential to be very messy!
I found a lovely tutorial on Craftiness is not Optional for a "Bapron" - a combination tie on bib and apron. So I dusted down the sewing machine for its first outing since Mini-M's arrival, and gave it a bash. 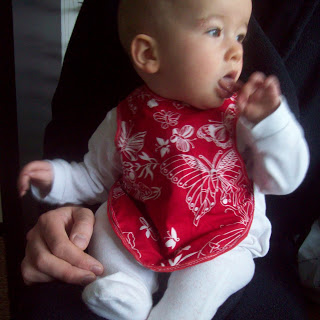 Distractedly looking out of the window whilst modelling!
The pattern is simple, her instructions are fab, and it is a great quick-fix almost instant gratification project. If you don't look too closely at the stitching, then I'll count it as a success. I think I created the sewing equivalent of crazy paving - my stitching lines are all over the shop! 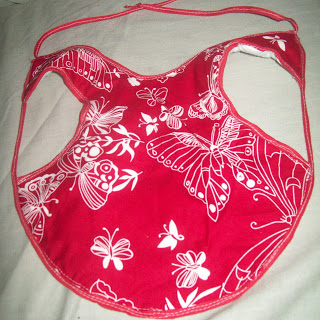 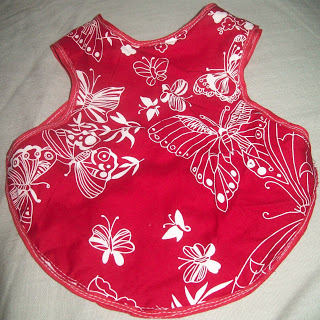 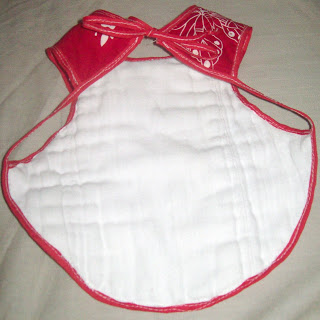 The back tied
However, I have 2 handy excuses lined up already...
To make it extra absorbent, I used some super thick muslin padding I had lying around, so in places I was effectively trying to sew through about 8 layers of material.
I also had some red bias tape kicking about which I decided to use up, rather than making my own, just that it was pretty narrow - even more so when used with the super fat muslin layer.
But how neat does the stitching on a bib need to be anyway.... in fact if it was beautifully finished it would seem a shame to smear it in puree (or at least that's what I'm telling myself!)?
Now it just needs to be road tested! At least this one shouldn't show strawberry juice stains too badly - they're Mini-M's favourite :o) 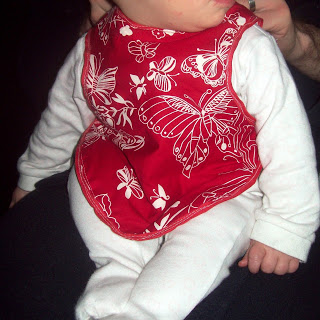 Mini-M looking grumpy so I chopped the grump off!