I love finding unexpected supermarket bargains - particularly stuff that is marked down for quick sale with no apparent reason.

Like this jar of wholeberry cranberry sauce that was reduced to 10p! Since it still had 6 months on its shelf life, was undamaged and the seal was still good, I snapped it up. 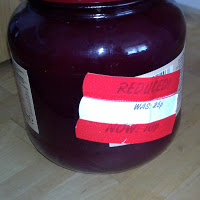 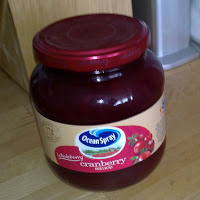 I used a Nigella Lawson recipe for Chocolate and Cola cake as a starter, and in my customary way, completely messed around with all the quantities and ingredients until I ended up with something completely different. 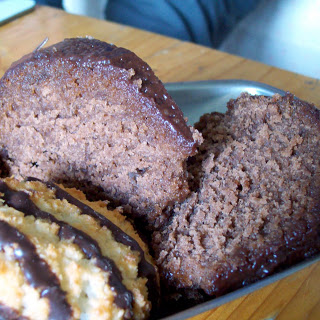 What I actually created tasted neither of cranberry, cola or even that much of chocolate. But it was a really lovely densely crumbed, gooey, slightly fruity, slightly spiced, lightly chocolaty cake that was perfect with a cuppa, and is definitely now on my make again list. Hence it's appearance here, so that I don't lose the recipe!


Preheat the oven to 180C (Fan 160C). Grease a large 12 inch bundt tin well.
In a large bowl sieve together the flour, sugar, baking powder, bicarbonate of soda and salt.
Measure the milk into a measuring jug, add the egg and vanilla and beat well.
In a saucepan, melt the margarine, cocoa powder, cranberry sauce and cola, heating gently until it has all melted and combined together.
Pour the melted mixture into the flour mixture, give it a quick stir, then add the egg and milk mixture and beat well until well blended and smooth.
Pour into the prepared tin and put the tin on a baking sheet.
Bake for about 40 mins, or until a skewer inserted into the deepest part comes out clean.
Once cooked remove from the oven and leave in the tin for 10 mins, then turn out onto a wire rack, and slide a sheet of newspaper underneath to catch the inevitable icing drips.
Sieve the icing sugar and leave to the side for a moment. Put the butter, cola and dark chocolate in a small saucepan, and heat over a really low heat until smooth and combined.
Add the icing sugar gradually until you have a thick but still runny icing (think a bit thicker than double cream).
Spoon the icing all over whilst the cake is still warm, and leave to set and cool before transferring it to a serving plate and enjoying! 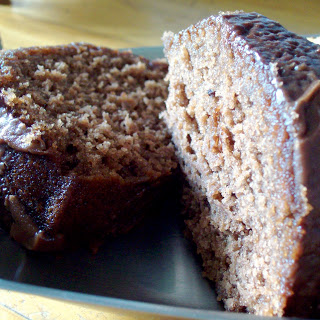