I cannot tell a lie - it has started to feel a bit personal! For the past couple of months now, Mini-M has been pretty much refusing to eat anything I have cooked. Jars of bought baby food have been going down fine, and anything homemade regardless of flavour, texture etc has been rejected. Which has been a bit demoralising because a) I love cooking b) I've put in a lot of thought and effort to make tasty dairy free meals and c) up until about a fortnight before her first birthday, she was a fantastic eater.
Anyway, the past few days have escalated to a new level, and yesterday she pretty much refused to eat anything I fed her, even from a jar, but the little monkey let Mr E feed her.
So imagine my relief today when she finally ate a) something without protest and b) something I had made.
Whilst she had a nap this afternoon I decided to make some mini drop scones for her, using the soya milk that was open in the fridge that she wont drink. They are only barely sweet, so not too naughty for little ones. Based on their success, I'm thinking of trying a savoury version soon! 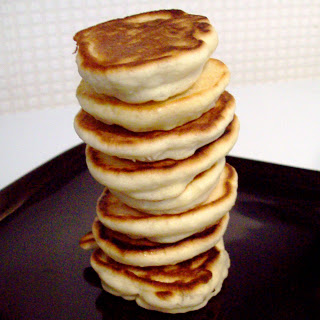 I wanted to boost the nutritional value of the pancakes (because lets face it some flour, a couple of raisins, a splash of soya milk and a grain or two of sugar isn't exactly in the superfood stakes) and decided I had nothing to lose by being a bit experimental, so I tried to create a slightly sweet chickpea spread - kind of a sweet humus if you will. I'm thinking that once she has mastered the art of dipping, this could be great for dipping bits of apple. 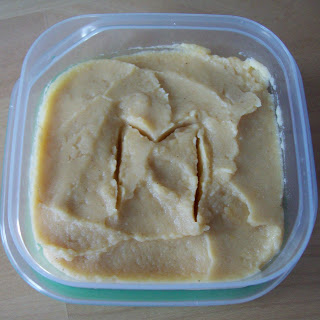 And lo and behold, the pancake and chickpea spread disappeared down the hatch. Big smiles all round (mainly from me it has to be said!)
Here are the recipes that I concocted!
Almost No-Sugar Mini Drop Scones
(Makes about 16)
Sieve the flour and baking powder together, then stir in the sugar.
Make a well in the centre of the dry ingredients.
Add the egg and half of the milk, and whisk together, continuing to add more milk as needed until you reach the consistency of thick cream.
Stir in the raisins.
Heat a small nonstick frying pan, and give it a very light greasing (pour in a little oil, then wipe most if it off again with a piece of kitchen roll).
Drop teaspoonfuls of the batter into the hot pan.
Let them cook until bubbles start to rise to the surface (a couple of minutes) then flip them over for a minute on the other side until done.
Chickpea, Cinnamon & Honey Spread
Makes 1 small tubs worth
Tip the chickpeas into a jug or large mug. Add all the other ingredients and blitz with the hand blender. Done!