In my googling for Dairy-free baking recipes over the past year, I have bookmarked a ridiculous number of recipes. Some Dairy-free. Some not. Some for baking. Some not. Most of them will probably never be made... but from time to time, the inkling, ingredients, and time coincide, and one of them makes the leap from blog to mixing bowl to oven... and back to blog!
And after that introduction this post is, unsurprisingly, about one such recipe. A while back I added Banana No Bake Cookies (Vegan, Gluten Free and No Added Sugar) by Cassie at back to her roots to my virtual recipe stash. And finally on Thursday, I made them.
The catalyst to making them was a squashy banana, which I then forgot to use (oops!), and a curiosity as to whether something so apparently wholesome would actually taste good and satisfying in a chocolatey-biscuity sort of way.
I'm pleased to report that they do. Not in exactly the same way as, say, an actual chocolate biscuit. But in a different equally good, and less guilty way. 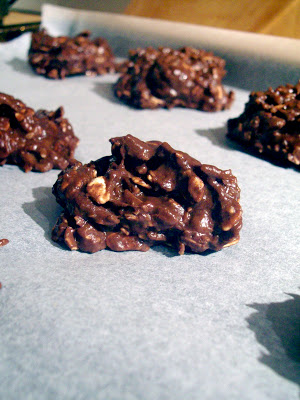 As usual, I messed about with the recipe a little... I am a compulsive substituter! I still don't understand how I can have a cupboard absolutely jam packed full of cooking and backing ingredients, and never have the correct ones for any recipe. Cassie's recipe called for almond butter, which I didn't have, but I did have peanut butter, so in that went. Similarly chia seeds. I had to ask Wikipedia what these ever were, which means I definitely did not have any in the cupboard, but based on their Wiki picture alone, I substituted sesame seeds. They looked roughly about the same size... I still have no idea about taste similarity! My oats were of the non-gluten-free variety. And finally, scaled the quantity back since I didn't want to be eating them forever, and it still made plenty for Mr E and myself, plus some to give as a present. 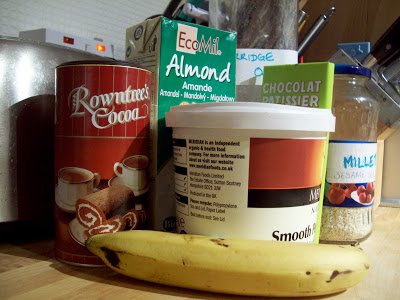 Chocolate Peanut Butter Banana No-Bake Cookies
(Makes 12)
In a medium saucepan, mash the banana.
Break the chocolate into pieces and add to the pan along with everything else apart from the oats.
Heat on low until melted, and beginning to bubble.
Let it boil gently for 2-3 minutes, stirring like crazy the whole time to stop it sticking on to the bottom and burning. (The vigorous stirring also helps get it nice and smooth)
Stir in the oats and mix until well coated, then dollop dessertspoonfuls on a baking sheet covered with parchment paper.
Allow to cool and set.
These do set firm, although would melt easily if held in a warm hand for a while, so eat them quick!
They can also be kept in the fridge, or Cassie suggests the freezer. My freezer is clearly a bit of a beast, since it froze them into rock solid bricks, which took ages to defrost - not a quick access chocolate fix! So if you have a super freezer like me, I'd recommend the fridge or room temperature. 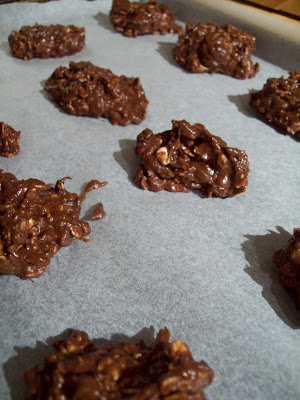 They keep well for several days, and generally get a bit more fudgy and dense as the oats absorb the coating. And whilst you're definitely getting a health punch from the ingredients, they don't taste too virtuous to be enjoyable. A win-win situation :o)