Sunday was Father's Day. (As an aside, you would not believe the internal debate I have just had about that apostrophe. And I'm pretty sure it is still wrong. Mini-M - what have you done to my brain? I used to know about apostrophes!!!!)

Mr E spent a lot of the weekend down in the Borders assessing a Duke of Edinburgh's Award expedition which left Mini-M and me with lots of time to plan some surprises!

On Saturday, we went on a shopping expedition to Lakeland for cake decorating supplies. I gave Mini-M free reign on the decoration choosing, and she went with footballs, pirates and orange sprinkles. I'm not sure if this is because she knew it was for Daddy, or because at the moment she is quite into footballs and pirates. She can quote the 'Mrs Pirate' book off by heart, and if you ask her what a pirate says, she replies "Aarrrrr". Is it wrong that I'm secretly pleased she chose the pirates over the flowers and sparkles, and more to the point, is the fact that she did so whilst dressed head to toe in pink (also her choice) the sign of a balanced individual...!

On Sunday, once Mr E had headed for the hills again, we got baking. In fact, the cake was in the oven by 9am - not bad work for a Saturday morning. We made a fresh pineapple and coconut cake. Once it was cooled and nap-time was over (for Mini-M, not me I hasten to add) it was on to the decoration. She helped to drizzle the icing over the cake, and couldn't wait to get stuck in with the decorations.

This is ALL her own work. My role was to stand next to her and make sure she didn't fall off the chair, and stop her eating too many liquorice all sorts!

She is definitely not of the less-is-more school of cake decorating. I mean, there was no question that all of the footballs, and all of the pirates would have to be used. The ultimate sprinkle quotient was low, since I had to intercept before they ended up sprinkled liberally all over the kitchen floor.

She was so proud of her handiwork. Unsurprisingly she wanted to eat it straight away, and I explained that it was a surprise for Daddy, and we would have to wait until he came home to eat it. After that, she didn't mention it again, and I thought she'd forgotten about it. But as soon as she heard Mr E's key in the lock, she took off at high speed for the front door and barrelled into him as he came in, shouting "Cake! Surprise!" in her most excited voice.

After a couple of minutes of conversation - of the 'how was your day' variety, she obviously decided things were not working out quite how she'd hoped, so hopefully piped up "Maybe cake?". Mr E, in full parent mode, suggested that main course would have to be eaten before cake. Next thing Mini-M was off at a run to the kitchen saying "My eating main course" - clearly hoping to clear the pre-cake hurdles as quickly as possible!

And thankfully, after that build up, it was a tasty cake! Truth be told, Mini-M pretty much just wanted to eat pirates and footballs, and was slightly aggrieved that they were rationed (since they are just sugar and food colouring - not a great pre-bedtime combination). Those of us with slightly more discerning tastes, however, thought that the cake was delicious - moist and fruity and tropical. And given that there was half a pineapple and a banana in the mix, arguably healthier than your average cake!


Peel and core the pineapple, and puree the pineapple and banana together. Beat in the eggs and oil, then  stir in the sugar. Lastly add the flour and cinnamon. Bake at 180C for about 40 mins until a skewer inserted comes out clean. I'll leave the decoration to your individual taste! 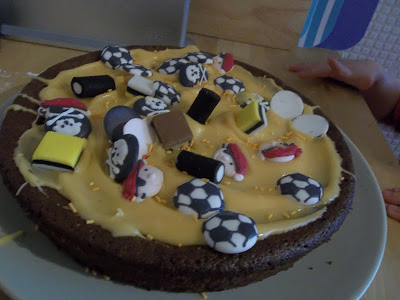