It's been a lovely weekend, with loads of fantastic company and fun. Mini-M is now asleep (at long last!), tea has been eaten (noodles with tofu, green pepper and hot and spicy peanut and honey sauce), and Sunday night is stretching out ahead, with some catch up blogging, with some background TV. Right now, for instance, I'm osmotically learning about historical sheep droving techniques on Countryfile...

Last week, I tackled another country on my geeky culinary world tour - cooking a recipe from each country I've never had a visitor from, based on the Google Analytics stats for Makey-Cakey - and it was the Isle of Man. Now I suspect that some of you may be questioning my grasp of geography, and I can almost hear the virtual exclamations of 'But the Isle of Man isn't a country!'. I know. It's not. But neither's Scotland, and it has its own unique foods, so my list is more a list of nations, or indeed even islands, states and regions with leanings towards independent identity - which includes the Isle of Man.

In the end I went with a steamed Potato and Treacle Pudding, since I had some frozen left over mashed potatoes squirrelled away in the freezer, and a packet of suet open from a previous unsuccessful attempt to get Mini-M to eat a savoury steamed pudding. 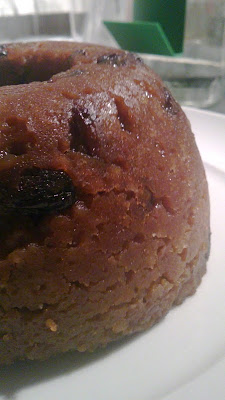 This was my first steamed pudding that I have actually steamed on the hob, rather than zapped in the mircowave, and it was a success. It is not a light summery pudding for those on a low carb, low fat diet! It is, however, a warm and comforting plate of sweet January stodge, which is sometimes what you want. My particular solution to the stodgy pudding situation (nutritionists look away now...) is not to have it as 'pudding' per se. Ditch the main course, and just have the pudding! Or indeed, as we did for a couple of days last week until it was used up, have it with milk for breakfast. I'm pretty sure it's not actually any worse for you than a bowl of sugary cereal!


Firstly, grease a 1 litre pudding basin.
In a large bowl, mix together the dry ingredients (flour, suet, breadcrumbs and bicarbonate of soda).
Add the mashed potatoes, syrup, treacle and a couple of tablespoons of milk.
Mix well, adding more milk as needed to get a very thick pouring consistency.
Stir in 2 heaped tablespoons of raisins, then pour into the prepared pudding basin.
Cover and steam over a low heat for 3 hours until cooked.
My pudding basin has a ceramic lid that ties on to the top, but otherwise you can use greaseproof paper, with a pleat for expansion, tied on with string, and go old-school.

I can imagine that if you liked custard (which I don't) this would have been nice with custard. Mini-M liked the raisins. I liked it with cold oat milk poured on it. 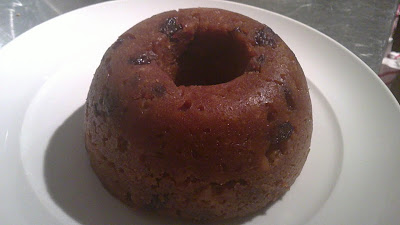 Since the 25th was Burns night, we actually ate some of this along with haggis. A surprising success. I'm not saying that all desserts would go well with meat. Trifle, for example, I'm pretty sure would be awful, however if you have something that is dense and treacle-y and fruity, the I would suggest an experiment - the results might surprise you!