Chocolate brownies are amazing, but sadly not one of life's superfoods :o(
So I decided to try to make 'healthy' brownies, which were both a success and failure.
Failure because they were totally un-brownie-like in texture and feel.
Success because they tasted pretty good in the end.
Instead of using butter (yep, they were completely butter/marge/oil free) I used prune puree which I've already posted about here. And some very roughly ground wholemeal flour which was ground by an old steam engine thing at an agricultural show.
I also chucked in some chopped up toffees that were lurking in the cupboard and going soft.
So here's a wee pic, no recipe, as I can't remember what I did, but a vague summary follows after the image. 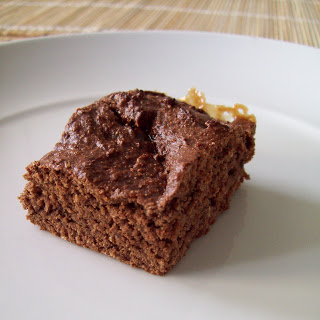 Chuck it all in a big bowl and mix well with an electric whisk (except the toffee) - add more milk if needed. Hoy it all into a greased brownie tin, and stick it into a medium oven (about 180C) for about half an hour. It doesn't taste luxurious, but it does taste nice, and feels a lot more virtuous than regular brownies.