Mini-M is asleep after a happy day watching hundreds of hardy (and crazy!) Loony Dookers at South Queensferry, followed by blowing bubbles on Cramond beach. Fresh air = an easy bedtime.

It seems like a good time to introduce my new crazy blog project, replacing the weekly photos, but without the weekly bit!

A few months ago, Mr E stupidly asked how many countries my blog had been viewed in. I was a bit of an Google Analytics geek already, but this simple enquiry sucked me in even further and has set me off on another cooking challenge: cooking a recipe from every country in the world I have not had a blog visit from.

Now before anyone misunderstands me, I'm not thinking that cooking a recipe from a country will lead to visitors from there. It probably wont, for a couple of key reasons... most people in said country will already know how to cook their typical foods and therefore are unlikely to be Googling it... and if they are they are unlikely to be Googling in English... and to be honest, if I'm wrong on both those assumptions, I kind of feel sorry for those poor visitors, as I no doubt make a culinary travesty of their treasured national recipes by doing my usual substituting and generally failing to follow recipes properly!

However for blog readers closer to home, it might hopefully make mildly interesting reading as I cook my way through a bunch of recipes you've probably never heard of, and you can feel your culinary horizons have been broadened a little along with mine.

Right, back to the challenge. I chose the list of countries I'd not had visitors from because it was more adventurous than the list I had - instead of staying in my comfort zone and cooking my way around mainland Europe, I'll be exploring the cuisines of Africa, Asia and beyond.

At the outset, I went searching online for a list of all the countries in the world. Unsurprisingly due to complex global politics it is a subject of much debate! In the end I decided to go with a belt and braces approach and used a list of countries, sovereign states, principalities - the lot. I'm ruling out any that Wikipedia says are uninhabited, which I think leaves me with around 150 nations! Eep - that's a big number!

So anyone that's any good at maths will realise that this project may keep me busy for more than 2012 - to do it all in a year, I'd have to notch up a couple of countries a week, which is probably optimistic. I did the weekly posting thing last year, and it was great to have that discipline, but I'm ready for a break from it now - so my Geeky Stats Cooking posts will be as and when I feel like it - or can get my hands on the right ingredients!

To kick things off, I'm awarding the honour of being the first country on my global blog tour to... Gibraltar, from which I've made Calentita - which is considered to be Gibraltar's national dish. It's a baked dish that is a bit like a cross between polenta and a yorkshire pudding, and made with chickpea flour.

Calentita (Makes 1x 8in tin)
The day before you want to cook the calentita, mix the flour, water and a pinch of salt in a jug, cover and leave overnight.
When you're ready to cook, pour the oil into a baking tin or dish and heat in a hot oven (about 240C). Once hot, take the dish out of the oven and give the mixture a good whisk before pouring it onto the hot oil. 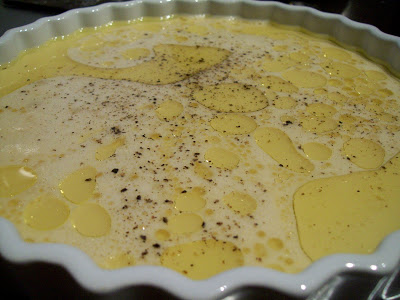 Sprinkle some black pepper over the surface, then quickly return to the oven and allow to cook for about half an hour until the top forms a golden crust.
Remove from the oven and cool - it will set as it cools. Once it has set, you can cut it into squares. 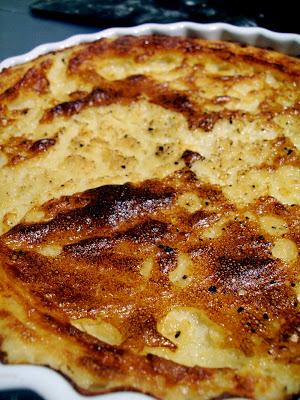 We ate it as an accompaniment to stew, and also sprinkled with a little grated sheep's milk cheese, then popped under a hot grill until melted. 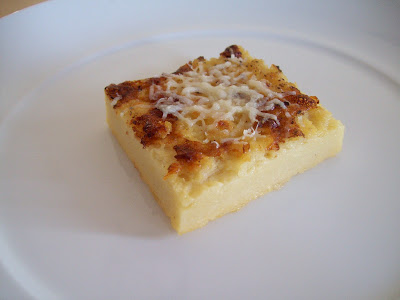 I under salted and pepper mine whilst cooking and the finished result was a little bland, so don't be shy, particularly with the pepper. It has a mild flavour, and on its own isn't startling, but it is substantial, filling and cheap - and nutritious from the chickpea flour. The tangy sharpness of the sheep cheese went well with it, as did some meaty stewy gravy.

A successful first stop on my global food adventure... wish me luck! And of course, if you feel like joining me on a similar adventure, then there's room on the 'Geeky Stats Cooking' cruise ship!