Parsnips... a veg that up until recently I would have sworn I hated, mainly because I think they taste of soap. And to be honest, if you just give me some cooked parsnip on its own, I still do. But since it's the winter - not a very veg-friendly time in Scotland, and parsnips are hardy creatures, our veg box has been full of them. And then I found a pack drastically reduced in the supermarket, and I'm a sucker for a bargain, which is how I came to find myself in the situation described by the title - parsnip overload!
So I did a bit of foodgawker surfing and felt the parsnip inspiration. Below are the results of the recent parsnip-fest on the menu in our house!
Parsnip Risotto - largely inspired by this recipe by Lucullian delights. But minus the parmesan, with some crispy Spanish ham, and balsamic syrup. 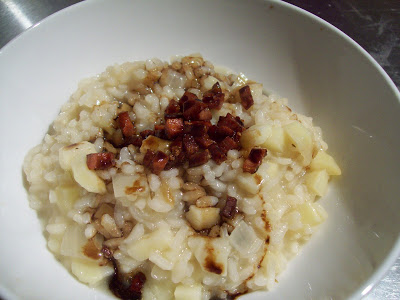 Here's a very rough recipe! (Serves 4)
Saute 1 chopped onion, in 1 tbsp olive oil, with 1 large pinch of dried rosemary, until the onion is soft. Add a little more oil, then tip in 3 small parsnips which have been peeled and diced. Allow to soften for about 5 mins. Then add 225g of risotto rice and stir until the rice is well coated in the oil. Add about 150ml of cider, and gradually about 1.2litres of chicken stock, in your normal risotto making fashion (some go for the gradual addition and near constant stirring, others bung it all in at the start and hope for the best. Me - I'm between the two - I add the first half of the liquids slowly with lots of stirring, then usually get impatient, and chuck the rest in at once). Meanwhile, in as small a pan as you have, simmer 3tbsp balsamic vinegar with 1 tbsp brown sugar until it goes syrupy. And multitasking to the max, finely chop some Serrano ham, or chorizo, or bacon, or basically anything meaty and salty, and fry until crispy. Drizzle the syrup and sprinkle with crispy ham before serving.
This was lovely - and didn't taste sad and disappointing at all, despite a) being made of parsnips, and b) missing the parmesan cheese and butter that usually make risotto yummy.
Next up I went for a parsnip and lamb tatin, based on a recipe by Food and Cook. It was also a parsnippy pleasure!
Parsnip and Lamb Tatin (serves 4) 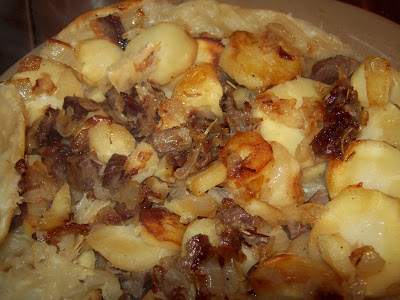 Chop 1 onion and saute in a tablespoon of olive oil with a generous pinch of dried rosemary. Then add a couple of medium parsnips, peeled and sliced, and about 250g of left over slow roasted lamb shoulder. Cook on the hob for about 5 mins until everything softens down a bit, then roll out 1 packed of ready made puff pastry into an approximate circle, and use to top your pan, pushing it down well around the edges (but don't forget like I did, that the pan edges are HOT!). Brush with beaten egg, then pop in the oven at about 180C for about 25 mins. Tip out onto a large plate or board, and cross your fingers it hasn't all stuck to the bottom!!!!! It adds and extra element of excitement to the dish. Mine did a bit, which is why it doesn't look too photogenic.
And finally, so that baby Martha didn't feel left out of the parsnip love...
Parsnip, apple and coconut puree (makes about 6 baby portions)
Peel and finely chop 1 apple and 1 parsnip. Put in a pan with a couple of tablespoons of water, and a couple of tablespoons of unsweetened dessicated coconut. Cook until the parsnip and apple are soft, then blitz with a magic wand. 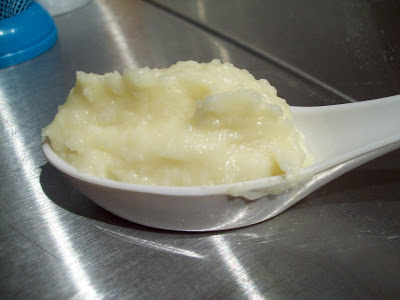